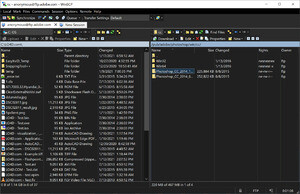 A review of WinSCP by Tina de Pierre

WinSCP is a open source and completely free FTP client for the Windows OS. It also functions natively as SFTP, SCP and FTPS clients.

With an active development community, WinSCP is unfortunately not as well known as certain rivals like FileZilla or paid FTP clients like that from Globalscape (CuteFTP). Actually, my first impression of WinSCP was that it is highly advanced and well done simply for the fact that unlike every other FTP client I've tried, WinSCP lists hidden folders on a UNIX system (prefixed with a period .) by default.

One of the strongest pillars of WinSCP is its support for security and encryption. With many of todays popular clients still defaulting to non-secured connections, this client actually defaults to secure connections over SFTP. Whether you're using an open WiFi network or you're in a country which monitors what you're doing online, security these days is a must. It goes without saying that you can have multiple sessions open as with almost all top-rated FTP/SFTP clients.

Upon launching WinSCP, we noticed immediately that the connect screen looks a lot like our favourite SSH/Telnet client PuTTY (and WinSCP can also launch PuTTY from the command menu). That definitely isn't a black mark against this client because in seriousness, a bloated layout with colourful flashy icons isn't what professionals are interested in seeing. Another interesting note is the option to switch between a Windows Explorer-like interface and the default Commander interface). We certainly preferred the default interface.

As with the connect dialog, the preferences also resemble popular programs like PuTTY. Each setting can be found under preferences in a streamlined list.

Editing remote files is quite simple. In fact when you do edit a file, you're not actually editing it live on the server. The client downloads the file first, allows you to edit it and then uploads the revision to the server when you're done.

The strong point of WinSCP is its inclusion of almost every possible feature you would need in an FTP/SFTP client while remaining secure. Highly recommended.

WinSCP can connect to sFTP servers, backup to FTP and edit PHP files.

This download is licensed as freeware for the Windows (32-bit and 64-bit) operating system on a laptop or desktop PC from ftp clients without restrictions. WinSCP 5.17.7 is available to all software users as a free download for Windows 10 PCs but also without a hitch on Windows 7 and Windows 8.

Compatibility with this SFTP client software may vary, but will generally run fine under Microsoft Windows 10, Windows 8, Windows 8.1, Windows 7, Windows Vista and Windows XP on either a 32-bit or 64-bit setup. A separate x64 version may be available from winscp.

The program was created by the developer as a freeware product, but donations for the continued development are highly appreciated. You may generally make a donation via the developer's main web site.

Ranking in
FTP Client Software
#2 of 36